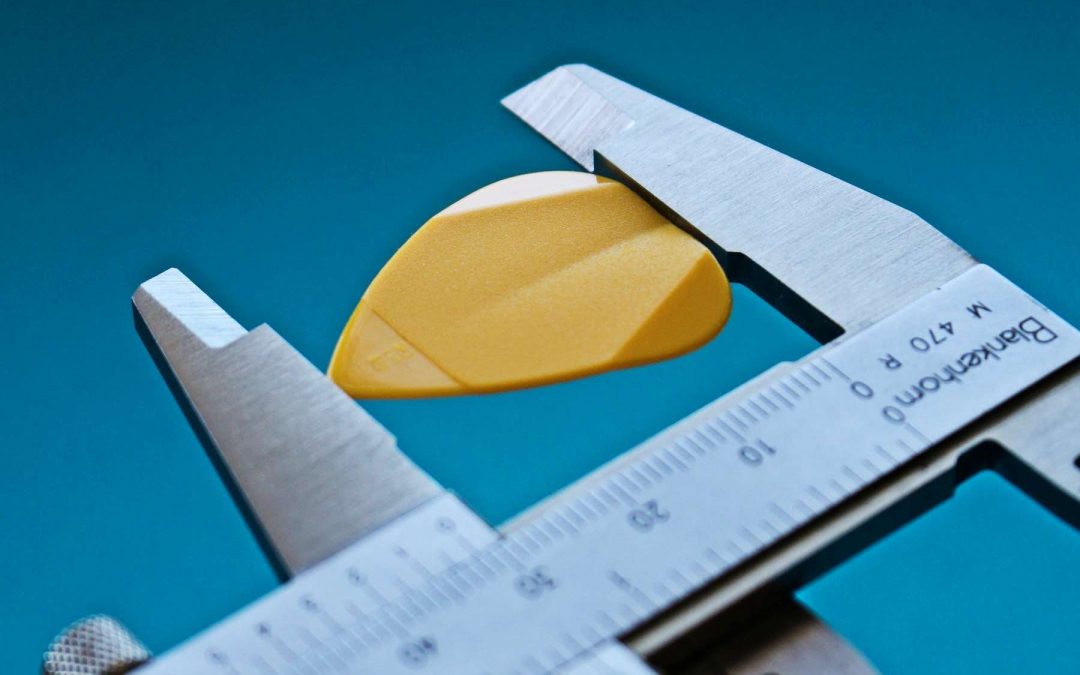 There’s a reason why guitars are so popular among beginners. They’re accessible, they’re not that hard to figure out for basic stuff, and they’re fun. Be it acoustic or electric, there’s a lot of stuff that you can do. However, some beginners and intermediate players might have trouble with picks. So do guitar picks break easily, or is there another issue at hand?

Yeah, it’s not just about losing your picks, but some are complaining about breaking them as well. The thing is, guitar picks shouldn’t break that easily. In most cases, all of the standard brands have their stuff made pretty well. So the problems might occur either with a poor choice of picks or with improper playing techniques.

However, you don’t need to worry, as plenty of young or lesser experienced guitar players are dealing with this. And since I’ve heard some guitar players complaining about it, I’ve decided to do a brief guide on this.

To be fair, dealing with broken plectrums is not something that should happen that often. In fact, it shouldn’t happen at all. Yes, it’s normal for guitar picks to get worn out, but breaking them is not the standard deal.

However, at the same time, we’re seeing plenty of younger players dealing with the issue. So there’s got to be a cause, right? Well, there are actually a few factors that come into this problem, and we’ll tackle them all one by one. These come down to a few basic things:

The first “culprit” here is the poor build quality. Believe it or not, there’s a whole science behind designing a proper guitar pick. They’re far from a simple piece of plastic that you’re supposed to use to hit against the strings.

As far as materials go, picks are made from plastics like nylon, celluloid, or Delrin. Some other examples also include harder materials like steel, which is becoming more popular. There are also picks made out of wood, bone, horn, rubber, felt, and even tortoiseshell. When it comes to synthetic materials, Ultem is also seeing more use lately.

Either way, nylon seems to be the most reliable, at least in most cases. There are, however, some variations to it as well. Different brands will also have different pick series and models that will give different results. If you want a safe bet, almost anything by Dunlop is a good way to go. This is especially the Jazz III picks, although they might not be for everyone’s taste.

From my own experience, some of Fender’s picks can be very flimsy. For instance, the classic celluloid picks are disappointing, like the classic 351 or 355 models. On the other hand, the F Grip 551 picks, which are made out of multi-ply celluloid, are much more durable.

Unfortunately, this is one of the factors that you’ll have to go through on your own. Guitar picks are changing pretty quickly, and an old model that you liked might change due to production costs and various business decisions.

You’ll most likely have to change your preferred brands and models as the years go by. However, as I already mentioned, Dunlop keeps things in order. Well, at least they have for the past couple of decades or so.

Then we have the matter of thickness and heaviness of these guitar picks. Although these two parameters are often put into the same category, you can have a slightly thicker but not as heavy guitar pick and vice-versa. But the heaviness, in the end, comes down to the choice of materials and how these picks are made. For instance, steel plectrums can be relatively thin but still pretty heavy.

In the broader sense, picks are divided into thin, medium, and thick according to both thickness and heaviness.

Thin picks, that are around 0.6 mm or less, are usually pretty soft and flexible. They’re very useful for strumming, like with acoustic rhythm players. Additionally, some vintage-oriented players also prefer them due to a “thinner”-sounding tone.

Picks that have thicknesses between 0.6 and 0.8 mm are usually referred to as “medium” picks. Of course, this may vary due to materials. But if we’re looking at the standard nylon and celluloid stuff, these are stiff enough to add some midrange to the tone and a different feel. They’re usually popular among electric guitar rhythm players, but they can also find a use for lead parts for those who prefer a slightly “softer” tone. 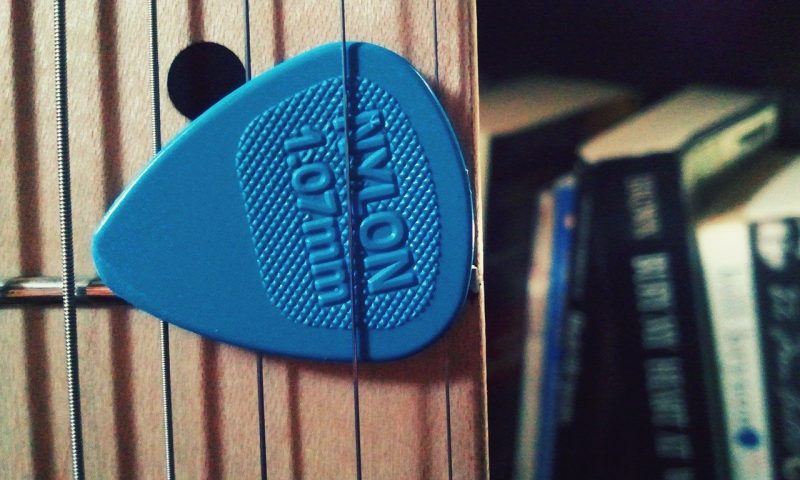 Finally, heavy picks are usually from 0.8 or 1 mm and above. They’re also often made from heavier polymers and have specially designed shapes and features that make them more suitable for lead players. Aside from a fuller tone, they also provide you with a stronger attack and quicker response. The most serious guitar players usually go with heavier picks both for rhythm and lead purposes.

Thickness and heaviness can have an impact here. Maybe your preferred playing style just requires a heavier pick.

Whether you’re ready to admit it or not, there’s a chance your picks are breaking due to poor technique. In combination with poorly-made picks, inadequate thickness, and inadequate materials, plectrums can break pretty quickly.

One of the most common mistakes is using an improper grip, attack angle, and dynamics. Most commonly, lesser experienced guitar players hit their picks completely parallel to the strings. In combination with bad pick quality, a strong grip, and hard-hitting playing, a pick can break easily.

The angle should always be adjusted according to the situation and what kind of tone you’re looking to achieve. When the pick is parallel to the strings, the tone is much brighter, the attack is stronger, and you get a quicker response from the strings. However, playing it too hard at this angle can help you break a string or your thinner and fragile pick.

Of course, the risk gets much higher if you’re playing bass guitar. For bass, I’d recommend using a specialized thicker plectrum.

Choosing the Right Type of Guitar Picks for Your Needs

With all this said, it’s important to know how to choose the right guitar pick for your needs. In fact, one of the most common problems with beginners and intermediate players is that they constantly choose the wrong kind of picks. Or, they just don’t know what they’re looking for.

Most guitar teachers will guide you to use thicker picks, stuff like Dunlop Jazz III and its variants. Of course, the choice is ultimately up to you, but you need to know what different types of picks will do to your tone and performance.

Essentially, you’ll want a softer and thinner plectrum for strumming, especially on an acoustic guitar. Additionally, thinner picks can help you get a “thinner” kind of tone. However, you’ll have to adapt your pick grip for this. This is what vintage-oriented players prefer, especially if they’re playing guitar with traditional single-coil pickups.

Beginners might find thinner picks to be much more comfortable. This is also the case if you’re playing a nylon-string classical guitar and want to learn how to play with a pick as well. Although not a “conventional” way to go, it’s still a good choice for beginners.

Heavier picks are considered to be a “standard” in most cases. They’re extremely useful for lead sections, but with proper picking angle and technique, you’ll also find them useful for rhythm sections.

Sitting in between these two options, medium picks are recommended for electric guitar rhythm playing. A pick that’s too soft won’t be a good choice for hard-rockin’ power cord-based riffs.

It’s Simple: Heavier Picks Are the Way to Go

However, I’d recommend focusing on heavier and relatively smaller guitar picks. There are plenty of variations to those, some even that have specialized design traits that enable softer action despite their heaviness.

The main reason behind this is that you have more control over your playing with such a pick. Sure, it will take more time to get ahold of your playing with a heavier pick. But on the other hand, you’ll have plenty of benefits. After all, there’s a reason why professional players usually prefer to go with heavier picks, often even the ones made from steel.

Do Guitar Picks Wear Out?

So we’ve covered the issue of guitar pick breaks, as well as the main “culprits” behind it. However, what you should worry about more is your picks wearing out. Again, the issue factors in materials and build quality.

But technically, all guitar picks wear out sooner or later. It’s just about choosing the ones that will last longer. If you want one that will serve you for a lifetime, then try picks made from stainless steel. You won’t notice them wearing out at all. But on the other hand, you’re risking potential damage to your strings.

In fact, if you’re using steel guitar picks, you’ll be breaking your strings much more often. But with the right technique and approach, you’ll be able to use them with a significantly lower risk of making any damage to your strings.