Why Are Guitar Effects Pedals So Expensive? 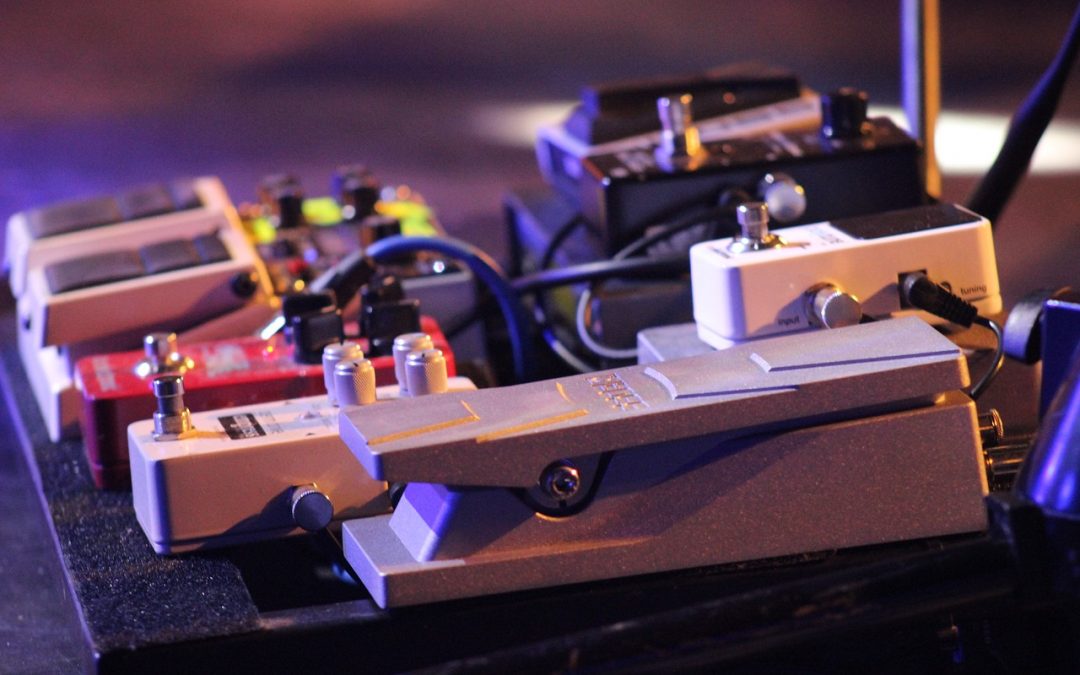 One of the best things about the electric guitar is that you can do so much with it. Sure, on its own, the instrument means nothing. But with a nice amp and a bunch of pedals, you’ll be creating an unfathomable number of new sonic possibilities. However, gear can be pretty expensive. So, have you ever wondered why are guitar pedals so expensive?

The presumption that guitar pedals are expensive is not entirely true. First, it depends on what you believe is expensive. Secondly, their practical value can sometimes justify the price. And thirdly, there are actually some cheap brands, although guitar players tend to avoid them for some reason.

But even if a pedal is around $50 or slightly below this price, it still adds up if you buy more of them. So a single effects pedal might not be that expensive, but getting a full rig certainly is.

Okay, it makes sense if we look at it from this perspective. But at the same time, why does it all get so expensive?

We can agree that this isn’t a simple question to answer and it needs to be elaborated further. There are a few main reasons that I’ll explain below, and there are also a few other closely related topics that I’d like to discuss.

Main Reasons Why Guitar Effects Pedals Are So Expensive

One of the main reasons why guitar effects pedals can get so expensive is the simple supply and demand rule. While the supply is usually not an issue, as manufacturing always persists, the demand for certain pedals can significantly increase their prices.

Like it or not, the product’s market value is the most important factor here. We could potentially discuss this, but I’m not exactly an economics expert to further elaborate on this. It’s just a fact that you’ll have to accept.

If there’s a pedal that everyone wants and if the marketing was done right, then the price will certainly get higher. Of course, healthy competition keeps the prices from skyrocketing as most of the effects can be easily made by any manufacturer. Somebody will always offer a cheaper solution.

However, if we’re talking about an effect that no one can replicate, then it’s expected for the price to jump.

Of course, manufacturing costs are always the issue. This is especially the case with companies that haven’t outsourced their production. Just like with phones or computers, a lot of pedal manufacturers have their stuff made overseas, mostly in China. But you still have the manufacturing and other costs, right?

There’s a lot of factors involved here as well. Some pedal models will require very specific components, including op-amps, diodes, and transistors. If these are in limited availability or are made by just one company, they get more expensive, and thus the pedal’s price increases.

It’s also worth noting that harder metal casings significantly increase manufacturing costs. These have their practical value, not only protecting the circuitry from damage, but also from potential electromagnetic interference.

You might have heard of the so-called “boutique” pedals. To those not familiar with the concept, these are pedals with premium-quality components made by hand in limited quantities. Their effect is unique and they’ll even come with special artwork.

Some even offer a few custom modifications and variants. One such example is the Analog Man King of Tone distortion pedal. The waiting list for this one is pretty long, and an individual is allowed only for a limited quantity of these pedals in their lifetime.

Needless to say, such pedals can get pretty expensive. Used ones can even get more expensive than the originals, especially if the quantity is very limited.

Finally, some old vintage pedals can get the status of highly-valued collector’s items. Although usually not that impressive and versatile since they were made in the old days, they’re respected either for their tone or historical value.

This is a bit of a touchy topic as there have been debates about whether they’re worth the price or not. In all honesty, these are, in almost all cases, items with historic rather than sonic value.

Some effects devices are very specific, sensitive, and unique, even requiring maintenance. Although not technically pedals, tape-based delay units are a good example.

It’s No Secret That Many Pedals Are Often Overpriced…

Okay, it’s time for some good old myth-busting. We mentioned the whole “boutique” thing. However, this term is used loosely. And, quite often, pedals that are labeled as “boutique” are not worth the price.

In fact, their price exceeds the practical value and tone quality. You can find a regular $50 distortion pedal that’s as good as a $200 one just because it is, for some reason, considered to be “boutique.”

While there certainly are some high-quality hand-made pedals, a lot of the small to medium-sized brands will try to inflate the price by perpetuating myths of magical and rare components.

Additionally, you may have some hand-wired circuitries instead of printed circuit boards. But even then, there’s hardly any difference in the sonic output of a pedal. Or no difference at all.

Analog Circuitry: Myth or Not?

The same thing can often be said about some analog effects pedals. To those not familiar, analog pedals don’t process your signal using digital processing units. Instead, they have transistors, op-amps, diodes, so-called “bucket brigade devices,” and other analog processing components.

Distortion pedals of all kinds are usually all analog, as they’re easy to make. Modulation, delay, reverb, and other effects can be either digital or analog. 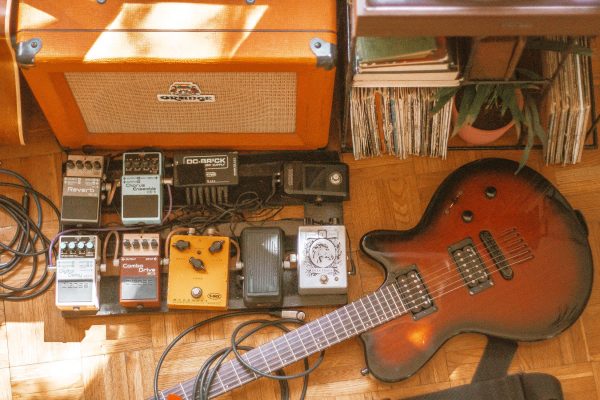 Now, the issue of analog pedals is somewhat controversial. These pedals are more expensive than digital ones and plenty of guitar players value their “natural” tone. But to be fair, digital pedals are more than enough. Some can even replicate specific devices, like tape-based delays, flangers, and choruses.

Sure, a lot of people value analog pedals with BBD chips (bucket brigade devices), but there’s usually minor or no difference in tone at all. But this is open for debate as many guitarists claim to notice a significant difference between analog and digital devices.

At the same time, the whole “analog” thing is often used as a marketing ploy, offering you the “good old” analog tone. If the pedal is analog, the brand will make sure that they point it out, either on the pedal’s designated name or at least on the package and marketing material. Honestly, rarely any of them will care about the tone, but they sure care about inflating the price.

What’s interesting is that back in the 1980s, when digital effects were a thing, brands used the word “digital” to promote them. The “clear” tone and increased delay times were used as the main points to help sell these pedals and increase their prices.

If we’re talking about discontinued stuff, there are pedals that get ridiculously expensive. The increase in their price is usually due to the fame of a certain pedal.

The best example is the Klon Centaur pedal. To cut its story short, a guy named Bill Finnegan made these pedals by hand from 1994 to 2009, with a total of about 8000 units built.

Sure, it was an awesome-sounding pedal. Although simple, it could actually do a lot of stuff when paired with a tube amp. And to protect its secrets, Finnegan gooped all the circuitries (covered in black epoxy resin).

But after its discontinuation, the pedal’s fame grew. And these days, you can find them priced well over $5000, which is, in all honesty, absurd. The pedal is awesome, but its practical value is definitely not worth this astronomical price.

There Are Actually Effects Pedals That Are Not That Expensive. But Are They Worth It?

Although you might think all the pedals are expensive, there’s actually a lot of cheap stuff on the market. And, although not everyone believes it, there are actually more than decent effects pedals at ridiculously low prices.

It may be a controversial thing to say, but a lot of cheap pedals can sound as good as the super-expensive stuff. The only downside may be the build quality, as a lot of them use plastic casings and some cheaper components.

Additionally, a plastic casing may cause unwanted noise due to electromagnetic interference. This can be a real issue as interferences are all around us. This is why I’d advise you to try these cheap pedals out before making a purchase.

If you’re up for some experimenting, maybe you can try and find a solution for shielding these pedals. But then again, I’d advise you don’t do it if you’re not already experienced with modifying electronic devices.

In case you’re up for checking out cheap but good pedals, these are the brands that you should be looking into:

These brands may not be that popular among guitar players. Quite often, they’ll be slammed for poor build quality and awful tone. I can tell you with certainty that the tone thing, in the majority of cases, is not true. The build quality can be an issue, especially if you’re taking pedals on the road. But these brands are so cheap that you can buy a spare unit if you’re worried. 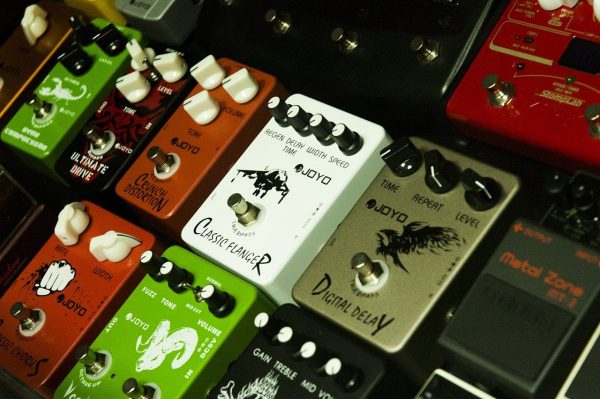 If you’re still not up for buying any cheap-brand pedals, I completely understand. But still, there’s no reason to pay over $200 for a good pedal. The famous brands listed below have some cheaper, or relatively cheaper, stuff to offer as well: