Should You Replace All Guitar Strings When One Breaks? 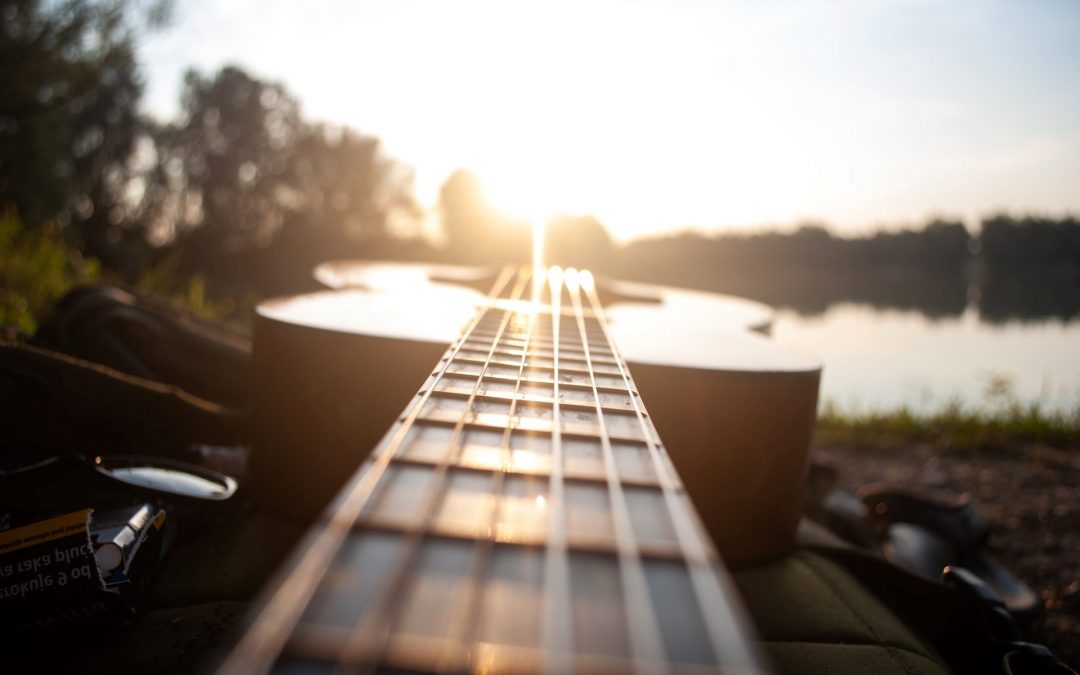 So, you sit down to practice your favorite instrument, and a couple of minutes into the session – one of your guitar strings breaks. You’ve got a fresh pack of strings laying around someplace inside your room. However, one thing bothers you a bit: should you replace all guitar strings when one breaks or just the one that caused all the agony? You’ll find an answer to that beginner guitarist’s conundrum in the text below.

Keep in mind that this article won’t consist solely of the answer we’re promised in the previous sentence. Nope. We’ll expand our little discussion on faulty guitar strings to cover everything that you might want to know about the piece of equipment in question. Stay tuned for some useful info & tips!

If you’re only starting out, it might be better to replace only the broken string until you get into the hang of things. However, you’ll get into “the hang of things” much faster if you learn how to restring your guitar totally, without much hassle. So, it might be the best idea to do a total string replacement.

Here at Music Gear Heads, we’re trying our best to discourage folks from reading only the snippet. However, we’re getting a bit tired of it. So, won’t you please read the whole text?

Why do guitar strings break?

As always, before we continue to talk about our main subject for today, let’s consider just why guitar strings break, and whose fault it is.

So, needless to say, we’ve all been there. If you’ve played the guitar for longer than a month, there’s a good chance you’ve experienced the whole string-breaking scenario far too many times to count. Still, have you ever wondered exactly why this happens? There are a few things that might cause your strings to break. Here we’ll show you some of them!

Oh, and speaking of guitar strings (and we’ll talk about them a lot today), here’s an article about just how will D’Addario strings last you!

#1 The bridge is too sharp

If you’ve noticed that one of your guitar strings seems to break over & over again? It’s always the same one, right? If that’s so, you’ll want to see where the break happens. Okay, so you’ve realized that it happens a couple of inches away from the ball end? If so, you should point your index finger in the direction of your bridge, since that’s your prime suspect.

Anyway, keep in mind that your guitar’s bridge is the most usual of usual locations where a string breaks. Also, the so-called Tune-O-Matic bridges are quite infamous for their ugly relationship with strings. This can also happen quite a lot with new guitars since saddles can be too sharp on a freshly-bought instrument.

So, how should one handle this? You’ll want to use an old string and rub it over the guitar bridge slot. It’ll probably smooth things out a bit. If that doesn’t work, use some sandpaper to smooth out the slot where the string lies at the bridge.

#2 The fret edges are too rough

So, we’ve mentioned why you should be suspicious of the bridge if the same string breaks over and over again. But what if the breaking point is always at the same spot on the string? That might mean your fret edges are simply too rough. How to know where it all happened? Just take the end of your faulty string and stretch it out all the way from the bridge to see where the whole issue began.

If you confirm that your frets are to blame, you’ll want to try smoothing them out using some sandpaper or a guitar file. Keep in mind that most guitar frets are made from nickel silver. That being said, you won’t need to use much force to smoothen them out.

Of course, if your strings are always breaking someplace near the nut, there’s your signal that something might be wrong with it. Typically, there are two occasions when a guitar nut can influence string breakage:

That being said, you’ll want to clean the nut each time you’re restringing your instrument in order to do away with any dirt or grime that might’ve found its home inside the slot. Also, feel free to use some nut sauce or lubricant while you’re changing the strings. Speaking of nuts here’s whether a nut’s able to cause some buzzing.

Here’s the thing: guitar strings are designed to hold up to a lot of pressure. It’s no wonder we’ve pointed the finger someplace different from the strings themselves in the past paragraphs. Anyway, if you’re using a set of standard guitar strings for alternate tuning, or you’re pushing the strings to handle higher tensions than the ones they were designed for, that might easily be the thing that’s causing your string(s) to break.

Okay, now that we’ve seen what can cause the guitar strings to break, it’s time we consider the main question this article has posed: should you replace all guitar strings when one breaks? Let’s find out the answer together! 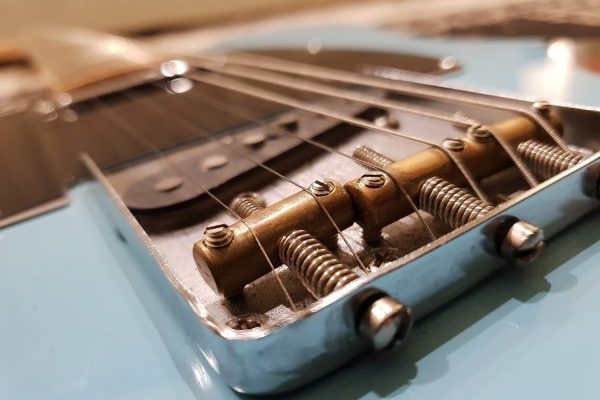 Should you replace all guitar strings when one breaks?

There are different opinions circling inside the guitar player’s community when it comes to this question. Instead of saying that you should definitely do this instead of that, we’ll try to provide you with the info from both sides of the debate. Okay, maybe we’ll eventually say what’s our suggestion.

Folks that say that it’s much better to restring your instrument totally argue that changing only one string, the one that broke, might create some disbalance. In other words: by changing the entire set, you’ll make sure that each string fits the string set’s respective type and size. However, if you’ve got an identical spare set, we don’t see why you shouldn’t simply change the one that broke, without replacing the rest. If the rest of the set seems fine, that is.

Now, folks that recommend you change only the broken string and not the rest say the following: replace your strings one at a time since you don’t want the tension applied on the guitar neck fluctuating too much. However, keep in mind that the necks you’ll find on contemporary guitars are made to withstand plenty of pressure. They’d easily handle the temporary absence of all guitar strings. Now that we’ve made this clear, naturally – a question appears: so, who’s to trust?

Our final answer is…

If you’re a beginner, it might be a good thing to replace only the broken string until you get into the hang of things. Still, you’ll get into the hang of things faster if you learn how to restring without exerting much effort. So, yeah, it might be a better idea to completely restring your instrument. Also, you can use the opportunity to conduct an all-out tune-up of your trusty instrument and clean the fretboard with an old toothbrush, guitar-cleaning oil, and a piece of cloth to prolong the life expectancy of your guitar.

Now that we’ve answered the main question, let’s see if there’s anything else you might find pretty interesting in relation to broken guitar strings.

How to prevent guitar strings from breaking?

Without further ado, let’s see some of the methods you can utilize in order to avoid breaking your guitar strings!

You know how they say: a clean string’s a happy string. As we’ve said, dirt and debris might do some damage to your guitar strings. Cleaning your strings after each time you play will save you a lot of sets, not to mention – money. Also, did you know that a dirty, sweaty string will eventually start to smell a bit like garlic? So, yeah, use a polish cloth and some string cleaner on your strings after each use.

Did you know that stretching your strings in the correct manner (lifting them a little bit upward, away from the fretboard) will guarantee your instrument’s tuning stability? It’ll also assist your strings to settle into their nut & saddle slots the way they’re supposed to. That will, subsequently, lessen the chance of your string breaking due to friction or a sharp fret edge. Just try not to overstretch, of course.

#3 Wind your strings in a proper manner

This stands for both locking and standard tuners: it’s best you enable at least 3/4 of a turn around the post in order to ensure that the string’s tension doesn’t end at a kink. Here’s the thing: once a wire’s kinked, it puts the string in a bad position and, well, weakens the wire, which will, of course, make the string more breakable.

Speaking of winding your guitar strings, here’s an article about whether you should wrap your strings around the posts with locking tuners.

Final words on the matter

Alright, dear folks, that’s about all there’s to say about whether you should replace all guitar strings when one breaks. Hopefully, you’ve enjoyed the info we’ve prepared for you today, and that you’ve learned something new, something that will prove useful in this way or another. Anyway, if you’re on the lookout for more guitar-related tips and other bits of info, click right here.