Why Do Bands Tune to B Flat? One of the best things about guitar is such an open approach to it. This goes for both acoustic and electric guitars, and even for bass guitars. And one of the best proofs that the instrument is so flexible is that you can use any tuning that you want. However, some musicians like to go really low. We have to ask then, why do bands tune to B-flat?

There’s actually one very simple answer. They do it because they can and because there’s no one who can stop them. The guitar has become modular that even some classical musicians are free to experiment with it.

But, of course, the most experimentation is usually in guitar-centric genres, like metal. And metal bands are actually the ones who would be willing to go as low as B-flat.

At one point, going lower in tunings became somewhat of competition within the metal scene. This phenomenon of downtuning eventually went to some “Mariana Trench” depths, being right on the edge of listenability, all for the sake of being heavier than the competition.

But not to spoil everything right away, I’ve decided to explore this musical phenomenon further and explain why some bands like to tune as low as B-flat.

Why Do Bands Tune to B-Flat?

As I already mentioned, bands tune to B-flat because they can. And the whole thing of going low is a part of the competitive aspect of the modern metal scene.

Additionally, in this whole competitive endeavor of going as low as possible, they’re also doing their best to sound as heavy as possible. A low tuning like B-flat will help them in that.

It’s important to note that we’re talking about B♭1, which is one augmented fourth, or three full steps, below the E standard. This is pretty low for an electric guitar, and it adds different harmonic content with the distortion on. This is especially the case with tube-driven amps. Well, if you’re still into them.

You can tune a regular 6-string guitar to B♭ standard. The tuning would then go like this, from the bottom to the highest string: B♭1, E♭2, A♭2, D♭3, F3, and B♭3. As you can notice, the distribution of intervals is the same as with the E standard tuning. It’s just three whole steps lower.

Bands that prefer 6-string guitars also have 4-string basses instead of 5-string ones. In this case, they tune one octave below the guitars. It goes B♭0, E♭1, A♭1, and D♭2.

Both guitars and basses require longer scale lengths and thicker strings in order to make things working properly. Sure, you can use a standard scale length of 25.5 inches or even 24.75 inches. But even with thicker string gauges, things might feel a bit “floppy.”

For this purpose, it’s best that you use baritone guitars. These have a scale length of 27 or more inches. This adds more tension for lower tunings, making them feel more comfortable and similar to regular guitars.

As far as 7-string guitars go, the B♭ tuning is just one semitone below the B standard. This is just like the E♭ tuning, only with an added B♭ string at the bottom. So it goes like this: B♭1, E♭2, A♭2, D♭3, G♭3, B3♭, and E♭4. As you can see, it’s a bit different compared to the 6-string one.

As for 5-string basses, which accompany 7-string guitars, we have pretty much the same deal, only one octave below. It goes B♭0, E♭1, A♭1, and D♭2.

Can You Play Genres Other Than Metal With This Tuning?

Such a low tuning is mostly associated with various metal subgenres. Adding distortion to downtuned guitars creates a tone that adds to the music’s overall heaviness. So it’s not that uncommon to find popular metal bands that occasionally choose to tune this way. The list is actually pretty long and includes Arch Enemy, Behemoth, Meshuggah on their early albums, Cannibal Corpse, and even Nickelback for one song.

However, heaviness lies in more than just the guitar tuning and distortion. Likewise, such a low tuning as B-flat finds use in other genres that aren’t as heavy-sounding. It’s usually baritone 6-string guitars, the ones with longer scale lengths, rather than 7-strings. 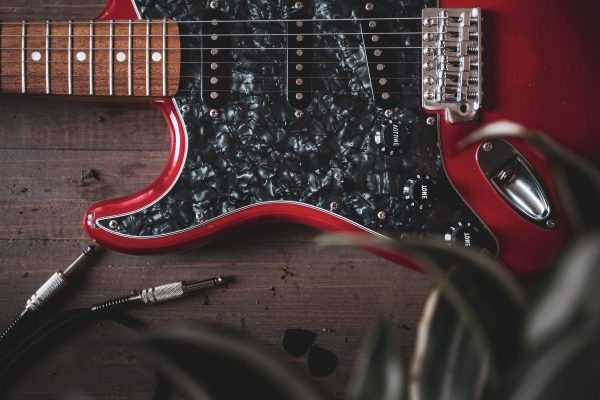 While not that common in other genres, you can definitely go this deep if you’re not a metal musician. It might be a bit experimental, but you can play blues rock, surf rock, jazz, and several other genres with such a tuning.

At the end of the day, music is all about freedom of expression and you can implement such a low tuning whichever way you want to. However, it just happens to find the most use in metal subgenres.

With this competition among bands to go deep, we have tunings way lower than B-flat. The so-called “djent” metal bands can go ridiculously low. 8-string guitars have a bottom F♯1 string. However, some even tune this string to E1, which makes it the same as with the 4-string bass.

There are some long-scale guitars, like Fender’s Bass VI which have an E standard tuning that’s one octave below. Technically, this instrument is closer to a regular guitar due to its pickups and other features. However, in a practical sense, it usually served as a bass guitar.

But things can even go lower than that. For instance, a metal band called Within the Ruins goes with 7-string guitars and a very unusual tuning: C1, F1, C2, F2, A♯2, D3, and G3. The bottom string is exactly one octave below the C2 or drop C or C standard tunings.

Therefore, there are no particular rules. As long as it sounds good to you and your audience, it’s all good.

But you should bear in mind that going too low comes with its challenges. If you’re using a regular 6-string guitar, the strings will feel like rubber. You can use some thicker string gauges to compensate for this.

However, nothing can really replace a longer scale length. With 26.5 or more inches, it gets the job done. In some cases, baritone guitars have scale lengths up to 30 or even 30.5 inches. Along with thicker string gauges, you’ll be able to get a good tone and quality performance with any low tuning.

Extended-range guitars are also common. While baritone guitars come with 6, this category includes anything with 7 or more strings. These guitars are usually associated with metal music. 8-string and even 9-string guitars are becoming more common. These also have elongated necks and significantly longer scale lengths compared to conventional 6-strings.

B-flat is actually a bit specific. More commonly, bands will use other tunings, all significantly lower than the E standard. It’s not sure when this trend in modern music actually started. But it is the early metal bands that started the trend. For instance, Black Sabbath went as low as the C-sharp standard in the 1970s.

Later on, during the 1980s, the E-flat standard became more widespread. But interesting lower tunings came later, during the 1990s. Some of the examples include:

Interestingly enough, this same exact question is asked about brass instruments and big bands. B-flat is simply the standard for this category of instruments. Trumpets, trombones, even cornets, and piccolo trumpets – the open note is always B-flat. Of course, some of them are octave higher or lower.

We could ask the question of why this is the case. Why B-flat? Well, it would be hard to fully understand this. But the most approximate explanation is that the instrument’s construction, which also determines its overall sonic qualities, was just designed to sound the best with this open note.

Before the modern versions of trumpets, trombones, and other brass instruments, people used various semi-improvised wind instruments. These were often made from horns and were pitched to pretty much anything. It just eventually happened that B-flat became a standard.

There are, however, trumpets and other brass instruments tuned to C or other notes. On the other hand, they’re not common and B-flat is considered to be a standard.

Meanwhile, this B-flat tuning may seem like a bit of an unusual thing from the perspective of other instruments. There are some string instruments that have open C or open A strings. It’s a common practice to have all strings tuned so that they could accommodate to B-flat of brass instruments.

All instruments in the orchestra then act as transposing instruments. The notation is written in keys that would be easier to read. For instance, reading C major is much easier compared to B-flat in standard notation.