Why Is It So Hard to Find a Bass Player? 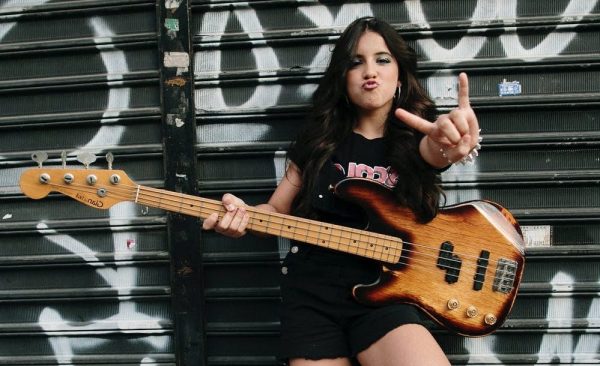 Honestly, there’s no feeling like getting the chance to start your first band. Well, we can say that for your second or third or any other that you’re planning to start. The whole thing is so exciting and inspiring. However, one of the biggest issues is in finding a bassist. So why is it so hard to find a bass player?

If you want a short answer, the bass guitar just isn’t that exciting to many. However, the full answer to this question might not be that simple. In some ways, it’s related to the whole rock and metal music culture. And even if we venture into other genres, we can notice almost the same issue.

The most obvious reason why musicians, young or adult, don’t take up the bass is that the instrument just isn’t attractive enough to them. There are common misconceptions about bass guitars being almost inaudible. Many guitar players unwillingly take up the bass in a band. In other words: they’re taking one for the team.

This really is a weird phenomenon. But at the same time, it’s something that young musicians are complaining about quite often. Let’s see what are the issues and why we’re facing this issue as musicians who want to start a band.

Why Are Bass Guitars So Unattractive to Beginners?

The root of all problems may lie in the fact that beginners usually start playing when young (when guitars seem bigger than them). And most programs usually include 6-string guitars but not bass guitars. For some reason, a bass guitar kind of got left out.

However, the most common reason why young musicians, or adult ones for that matter, don’t feel like taking up bass is that the instrument just isn’t that attractive to them. Everyone wants to play the guitar, blast the drums, and even do crazy stuff on the keyboards. But rarely anyone is willing to take up the bass. In the end, one guitar player needs to “take one for the team” and go with a bass guitar, as if it was a “lesser” instrument.

In fact, this is how most of the bass players started playing bass. Even some of the biggest legends in the world of rock music have originally been guitar players and then unwillingly took up bass. One of the names is Paul McCartney.

But most often, we have a group of young musicians forming a band. And there are two or three people in the bunch who play guitar. Eventually, the one that’s the least experienced, or just has the weakest playing skills at the moment, ends up taking up the bass guitar.

From my personal experience, this also causes fights, and the band might even break up before they even started working. And this all comes down to one thing – everyone thinks that bass guitars are much easier to play. It’s basically an insult to tell someone to play bass.

But the most undesirable thing about is that it’s a backing instrument. In almost all music, the bass guitar is almost inaudible. So young musicians end up thinking they won’t be heard if they play bass.

Why Is It So Hard to Find a Bass Player?

It’s these kinds of misconceptions and negative stereotypes that drive people away from taking up the bass. Most kids want to start playing guitar or drums. The drums are not as accessible as they’re loud and are every parent’s and neighbor’s nightmare unless there’s some serious sound isolation involved. So most of them end up playing the guitar and some might even take up piano or keyboards. 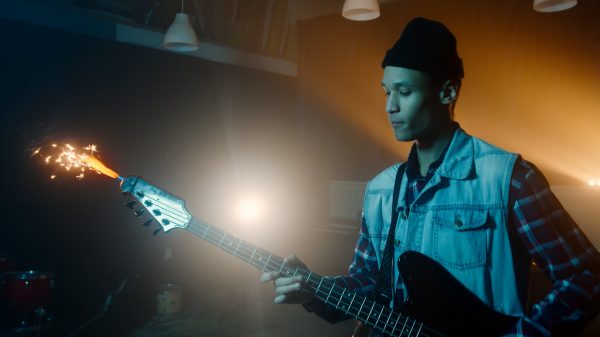 There are, however, some kids who are willing to take up the bass. And they are, obviously, in high demand. This is a crucial instrument and no band can really go without a bassist or a drummer. So if you take up the bass, you’ll have a really easy time finding more than just one band to play in.

In the end, it’s a simple “supply and demand” kind of thing. Guitarists, singers, drummers, and keyboard players start forming a band. And they immediately stumble upon this issue. It sometimes takes months until they have to work on their repertoire and practice until they find a suitable bassist.

As I already said, there’s hardly any chance that you can have a band without a bass guitarist. Maybe some of the modern metal bands can do it, those who use eight-string guitars and incredibly low tunings. But in all other cases, it would really make no sense to go without a bass player.

In fact, I’d say that you can’t have a good band without a good bassist and a good drummer. Guitar players can make some mistakes and avoid ruining the show for the audience. The same even goes for keyboard players and singers. However, if a bassist misses a note or beat, or just doesn’t have the feel for the groove, the whole band suffers.

The bass guitar is, in no way, an instrument to be taken lightly. If you’re thinking about whether you should or shouldn’t start playing bass, I’d say that you should. Not only will you be in high demand, but you’ll have a completely different perspective of music. Holding down the background chord progression and “filling in” this bottom-end of the spectrum is crucial for every successful band.

Besides, the whole thing about bass being inaudible is part of the old-school production practices. These days, you can find many bands that have really audible bass. It’s also not uncommon to find bassists doing lead sections. And I’m not talking about the stereotypically boring ones, but the stuff in the style of Victor Wooten or Marcus Miller. You’d be surprised at what the power of bass can do.

Aside from these two awesome guys that I mentioned, you should also check out these bassists:

I could go on listing great bassists for days. But I guess that you get my point – the bass guitar is a way more exciting instrument than people think it is.

Is Bass Guitar Easy to Learn?

So after all this info, we’re presented with a question – is bass guitar easy to learn? After reading these parts above, things do seem a bit conflicting, don’t they?

Well, the good old saying applies here – “It’s easy to learn but difficult to master.” I’d just add that it’s extremely difficult to master. You’d be surprised at how tricky it gets if you want to get things sounding right, especially in some of the more demanding genres. If you’re into the difficult stuff, check this one out.

If you’re just starting out on your music journey, the bass guitar is a great way to get into it. After all, you only have four strings. And there’s an abundance of pop and rock songs that have simple bass lines. These usually include root notes of chords played by other instruments and occasional other notes which are usually the part of the chord anyway.

So in this sense, yes, the bass guitar is easy to learn. You’ll have a much easier time handling only four strings and “doubling down” on guitar and keyboard parts. And a huge portion of rock and pop songs usually have some pretty simple bass lines. Along with the ukulele, I’d say that bass guitar is the easiest way to get into music.

However, just because plenty of songs have simpler arrangements doesn’t take away from the instrument’s awesomeness. What’s more, there are plenty of songs and genres, and subgenres that require you to play and compose some intricate bass parts. 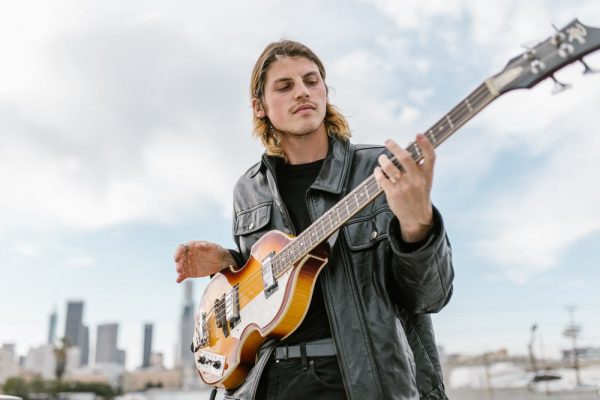 And not only that. Great bassists know how to hold down a groove and hit every note with precision. Even if there’s a seemingly simple bass line involved, you need to get everything right. The dynamics and precise timing can be pretty challenging. And with bass guitars, you can notice even the slightest mistake.

For instance, let’s take a simple song with a basic bass line. And let’s take a less experienced bass player and a professional one playing this same bass line with a band. Even if you’re not a musician, you would recognize who has more experience.

My point here is that bass guitar is all about nuances. An instrument that’s seemingly simple to play can actually be quite a challenge if you plan on playing it the right way. We’ve covered some of the good bass player traits in this article so make sure to check it out.

But even if you feel like bass guitars are too simple for you, bear in mind that there are extended-range basses as well. To those not familiar with the term, we’re talking about 5-string and 6-string basses. Well, there are also bass guitars with more than six strings, although they’re more of an experimental thing than a “standard.”

Either way, these instruments give you more options. A standard five-string bass has an additional bottom string. In the standard tuning, this is a B0 string, which is exactly one octave below the bottom string of seven-string guitars.

With a six-string bass guitar, you get the additional string in the bottom and one additional higher string. So we have B0 as the lowest and C3 as the highest string.

For more tips on playing an instrument and musical equipment, visit this page.