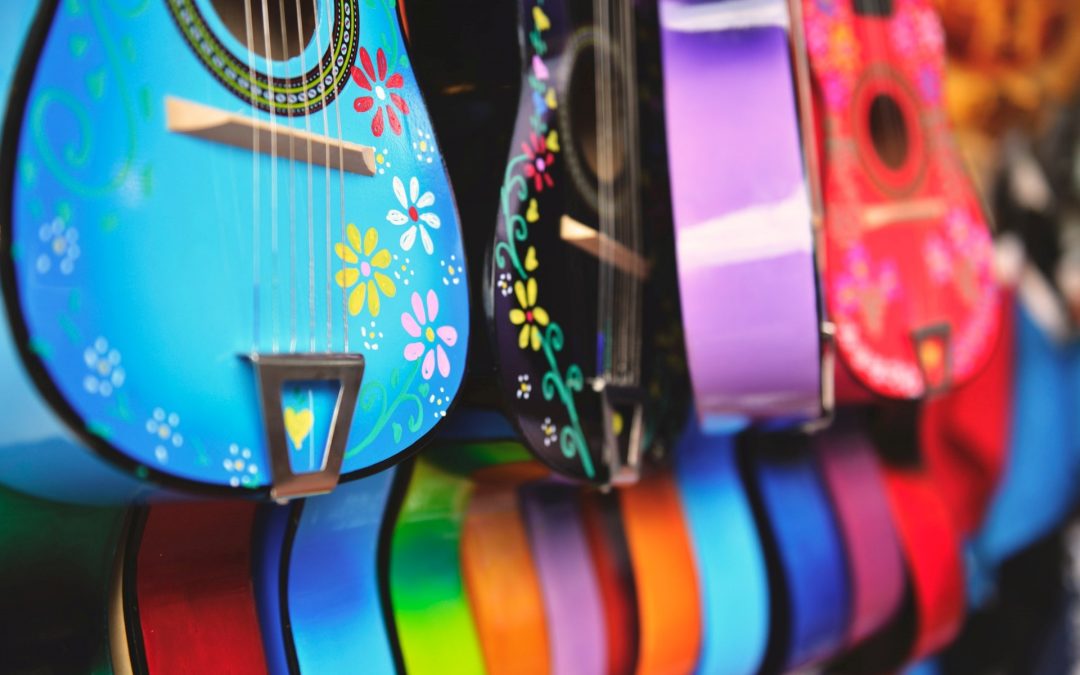 Let’s start this one with a silly question. But first, you’ll have to imagine you’re an aging rockstar trying to erase all the trivialities associated with today’s music industry. Got that one? Okay, so next scene: someone suggests you try playing the upcoming gig with colored guitar strings. Would your answer sound something like this: oh, what is the world coming to?

Whatever your answer, we’ll stop talking about aging rockstars this very instant. That’s right, we ran out of article opening ideas for a second, so… Oh, alright, we’ll try to be a bit more serious. If you were to browse online guitar forums, you’d find one question that’s particularly interesting: do colored guitar strings sound different? If you’re similar to us, here at Music Gear Heads, you’d definitely want to seek out the answer. You’ll find it in the text below!

Even though there’s no way to prove that theory, most guitarists have noticed that differently-colored nylon guitar strings do sound different. For instance, those labeled as gold/red possess a warmer sound. Blue ones, on the other hand, produce a much cooler sound.

Now, you’ll agree that’s really not enough to cover the vast plains of your interest. Okay, let’s get on with it already!

Before we tackle our main subject for today (colored guitar strings), we might want to consider some basic questions that always seem to come up when someone mentions guitar strings (in the online community, at least). So, what do we got here?

What color are guitar strings supposed to be?

Well, it depends on whether we’re talking about acoustic or electric guitars. In other words: the strings for these two types of instruments are made from different materials. Therefore, they’re also a bit different when it comes to color (but not because of it).

Talking about acoustic guitars, we can differentiate between:

Talking about electric guitars, we’re able to notice the difference between:

Will bronze strings work on an electric guitar?

In other words: is it possible to use acoustic strings with an electric guitar? The answer is: yes, it’s possible (but not really recommended). There’s a good reason why electric guitars require you to use nickel-plated, pure nickel, or stainless steel strings. And that reason is: because their winding is made from magnetically-active metal.

Now, it’s not like bronze or phosphor bronze strings won’t produce a sound if you put them on an electric guitar. You’ll experience sound, but it certainly won’t be something you’d want to hear. The level of the bronze string cores’ magnetic attributes just isn’t good enough to satisfy the demands of your ordinary electric guitar. So, what kind of sound can one expect? Well, let’s just say that if you’re into a sound that’s a bit muddy, weak, and pretty much unbalanced – you’ll enjoy hearing this combo. The sound won’t have the fullness you’d otherwise get with strings meant to be used with electric guitars.

Speaking of sound, here’s how you’ll get a punchy tom sound when playing drums.

Will electric guitar strings work on an acoustic guitar?

Now, if you’re using strings that are just too thin, you should know that it’s a bit dangerous to do so. The longer you use them, the better are chances that grooves will appear in the nut slots. Not to mention they’ll appear on the bridge saddle, too. If it’s possible and you’ve got no better options, use thinner electric guitar strings with your acoustic guitar, but just for a short period of time.

Oh, and are you, by any chance, wondering can you put flatwound strings on an acoustic guitar? If so, click on the highlighted text.

Which guitarists use nylon strings?

You’ll want to know that nylon strings are mostly used by classical guitar players. This type of strings produce a sound that’s soft & pleasant, and that might be the core reason why classical guitarists love this choice. Also, they possess a large vibrational amplitude once you pluck ’em, and require a good amount of space between each other since they need to ensure you’re not hitting the adjacent string.

Here’s the thing: usually, most beginner guitarists are well aware of the fact that lighter gauge strings are somehow easier to press down and fret. In other words: they won’t “wear out” your fingers just like heavier gauge strings. Now, if you’re, for instance, playing with steel-string acoustic strings, you might want to think about switching to light or ultra-light gauge strings, if, of course, the first type is causing your fingers to ache.

Okay, so we’ve gotten a bit carried away with this intro section; it’s a bit large, don’t you agree. Without further ado, let’s see whether or not colored guitar strings sound different!

Okay, so here’s the thing: we can differentiate between strings that were simply painted on and colored strings. You should absolutely ignore the first type since it can rub off the paint on your guitar and that’s not that good. However, you can find colored guitar strings that do sound different and won’t damage your trusty instrument!

For instance, with red Hannabach strings, customer experience tells this story: they’re much warmer-sounding than other nylon strings. Well, it only makes sense that red strings would sound warmer, right? Right. Anyway, some folks also tell us that blue nylon strings tend to sound a bit cooler (obviously).

So, yeah, it seems as though colored (nylon) guitar strings do sound different. Here’s what an expert guitarist once said (we’ll paraphrase):

We’ve got another dichotomy to discuss except colored vs. non-colored guitar strings. Let’s check it out!

Here we’ll walk you through the differences between coated and uncoated guitar strings (with an emphasis on how they differ when it comes to the sound they produce).

First things first, let’s just mention the fact that they do sound different; you’re able to differentiate between the two using only your ears. One might wonder: okay, so which guitar strings sound better? Well, one can’t say the sound of coated strings is better. That’s because they’re usually heavier (since they possess a polymer layer). The string mass will have an influence on the tonal frequency of the guitar string (and not in a good way). Once string density goes up, the fundamental frequency of your strings ends up being small.

What about other characteristics?

Okay, one might want to know about their other differences (besides the difference in sound quality, that is). Here’s where they also diverge:

That’s about it on the differences between coated and uncoated strings. All that’s left is to say goodbye.

Alright, dear music-loving folks, that’s all for our take on the question of whether or not colored guitar strings sound different. Hopefully, you’ve enjoyed reading this piece as much as we did writing it! For more useful tips on playing your favorite instrument, you’ll want to pay a visit to the section of our blog where it’s all guitar-related.