Why Do Guitarists Paint Their Nails? 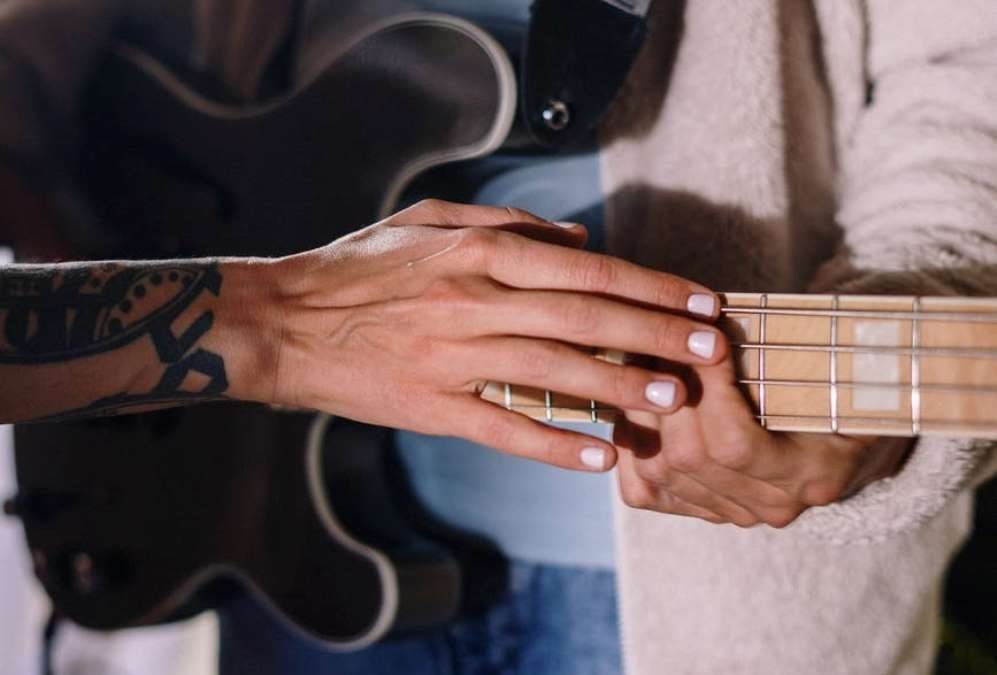 If you play guitar, or if you’re just into guitars, you know that these are pretty versatile instruments. Additionally, there’s no single “proper” way how to play them. And even if we get into a particular style, you’ll notice that every guitar player has their own ways of doing things. However, you also notice that some of them have weird practices, like painting their fingernails. So why do guitarists paint their nails?

Well, first off, it’s not like all of them have regular pedicure appointments. On the other hand, it’s hard to say how many actually paint their fingernails. But we still notice that some of them do, right? What’s the deal here?

There are two main reasons for guitarists painting their fingernails:

Yes, it’s as simple as that. Not really exciting either. Well, the practical purpose of painting fingernails is actually pretty interesting. If you’re wondering why some guitarists paint their nails, it’s that their nails would last longer. Additionally, it can impact the tone quality. And the practice is most common among classical guitar players as they’re the ones who play using their fingernails.

So with all this said, we’ll be exploring this issue further. Let’s dig into this seemingly superficial topic and explain a few things more about it.

In the practical sense, using nail polish is only widespread among classical and flamenco guitar players. Nylon-string guitars are usually performed using fingerpicking techniques, preferably by using actual fingernails. And taking proper care of them can not only help you perform better but even enhance your tone. Some even argue that it’s that factor that “makes or breaks” a classical or a flamenco guitar player.

Do I Really Need to Have Long Nails If I Want to Play the Guitar?

If you’re playing guitar or just like guitar-based music, you’ve most likely seen some guitar players with long fingernails. Of course, this is only for the picking hand (right hand for right-handed players). Having long fingernails on the fretting hand would be counterproductive.

Using fingernails to pick the guitar strings is common with classical and flamenco players. Sure, you can play steel-string guitars this way as well, but you’ll be facing a new problem. Steel strings would most likely ruin your nails before they could regenerate. Additionally, it’s just not a common practice for Western-style steel-string guitars and some would consider the tone to be too “sharp.”

What’s the Main Point of Having Long Nails?

Having long fingernails is not obligatory for classical and flamenco players. It’s a “standard” of sorts, but some also prefer to go without them. So what’s the deal with it? Picking with your fingernails and gives you more flexibility.

In fact, you can completely change your tone and attack by maintaining them properly. You can achieve anything from warmer to brighter tones. That’s how steel-string or electric guitar players do with different types of plectrums.

As for classical players, there’s a whole process behind finding the right shape of fingernails and maintaining it. It depends on the following factors:

However, no matter these factors, methods for shaping and maintaining fingernails are the same. One of these methods is also using different types of nail polish.

Why Do Classical Guitarists Paint Their Nails?

At one point, you’ll notice that there’s noticeably more damage than growth. Therefore, by adding a protective layer or nail polish, you’ll have stronger fingernails in the longer run. Additionally, a type of nail polish can even impact your tone.

However, for this purpose, classical and flamenco guitar players don’t use your average regular nail polish or nail paint. Sure, adding a layer of your regular transparent nail polish can also help to some extent. But there should be more to it. This is why they prefer to use nail hardeners, also known as nail strengtheners.

You see, when there’s constant friction between nails and strings, the risk of breaking a nail gets higher. Nail hardening substances can help you out to keep your nails in check. If you use hardeners, you’ll not only notice less residue or change in shape – it will also keep your nails safer from breaking.

Luckily, there’s an abundance of easy-to-use nail strengtheners that you can find online. These are most often the same types of nail strengtheners used for aesthetic purposes. In most cases, classical or flamenco players apply it about once per week. But it all depends on what your nails are like and how often you play.

Those who prefer to play with their fingernails have to take care of occasional (or frequent) breaks. In some cases, guitarists even prefer to use fake nails as a preventive measure. However, if natural fingernails split, using super glue to keep them together as they grow is a good method.

It’s a bit of a tricky process though. You can add some cotton fiber to it while applying superglue and then let it dry. After it’s all done, file it down and polish it carefully. For this purpose, we advise that you consult someone who’s experienced with manicures. However, prevention is better. Therefore, consider learning a thing or two about how you can protect your nails while playing.

Look, if you noticed a guitar player with nail polish, the chances are that it was for aesthetic purposes. Actually, it’s the only way that you can notice it. I don’t feel like coming out negative about it, but some guitar players might argue that adding black nail polish keeps their fingernails safe. Or, for instance, that it even helps them perform.

But this is not the case. If there’s a protective factor in this equation, then it’s pretty minimal and, to be fair, insignificant. The sole purpose for painting your fingernails a certain color with conventional nail polish is purely aesthetic. That’s it. If they tell you otherwise, they’re either not telling the truth or are misguided.

The practice of painting fingernails is usually common among some metal and punk guitar players. Of course, the practice is also almost synonymous with the emo movement. The same could be said about subgenres that stemmed from metal, punk, and emo visual identities, like metalcore.

Like it or not, the aesthetic aspect of rock and metal music is an important part of that world. Sure, the main focus is still on the music and songwriting (or at least I hope so). But having a specific look makes it the real deal, the full package that you get with the music. After all, aren’t all those artistic and vivid album covers an important visual aspect of it?

No matter how much I prefer to focus on the music, I can’t deny the importance of aesthetics in rock and metal music. After all, it’s all about expression, just like having long hair or a long beard is. Some prefer to add ripped jeans, some have chains, and some like to paint their fingernails. And if it works in their favor, it’s as important as any other visual aspect of it.

Also, it’s not always clear whether someone’s wearing something either because of aesthetic or practical purpose. For instance, have you thought about why bass genius Scott Devine plays with gloves?

Of course, the trend is somewhat widespread among famous rock, punk, and metal players. It’s just part of that “outsider” kind of mentality. With that said, here are a few famous guitar players who are known, or have been known, for painting their fingernails. Some of them include: 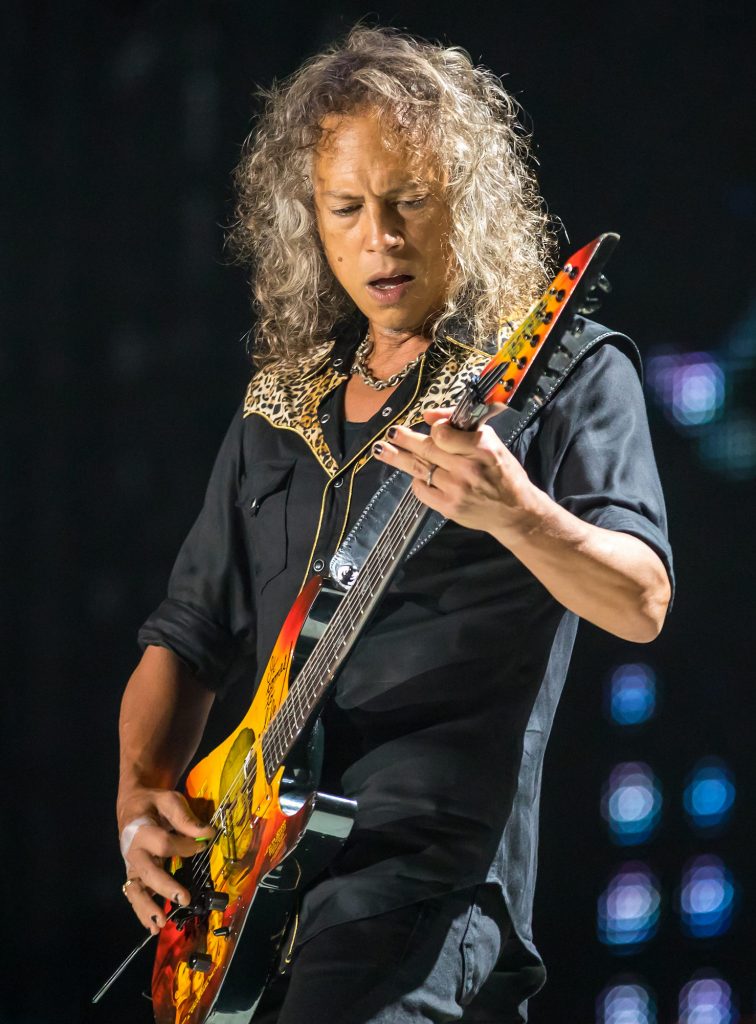 Johnny Marr’s reason is interesting though. Aside from the aesthetic aspect, The Smiths guitarist says he’s a bit superstitious, and painting his fingernails is a part of his routine. But as we’ve said, in the end, it’s all mostly about appearance.

These days, painting fingernails is becoming less of a gender thing. You have famous men who paint, or who have painted, their fingernails. Anyone from mainstream pop singers to Hollywood actors has been seen with painted fingernails.

I’m a Guitar Player, Should I Paint My Fingernails?

So you’re probably wondering whether you should paint your fingernails. Well, it comes down to what you want and what you need. From a practical point of view, it’s only useful if you’re playing with your fingernails. This is most common among classical and flamenco guitarists. Just bear in mind that your nails will get more damaged if you’re using them for plucking steel strings.

Aside from its protective purpose, we’ve also mentioned nail polish as part of aesthetics. Do you play punk, rock, or metal, or any of their subgenres? Are you asking yourself whether you should paint your fingernails?

Well, I can’t give a definitive answer to this. If it works for you and you like the way it looks, then why not? Just bear in mind that there’s no other reason for it other than pure aesthetics.