Why Do Metal Guitarists Wear Wristbands? 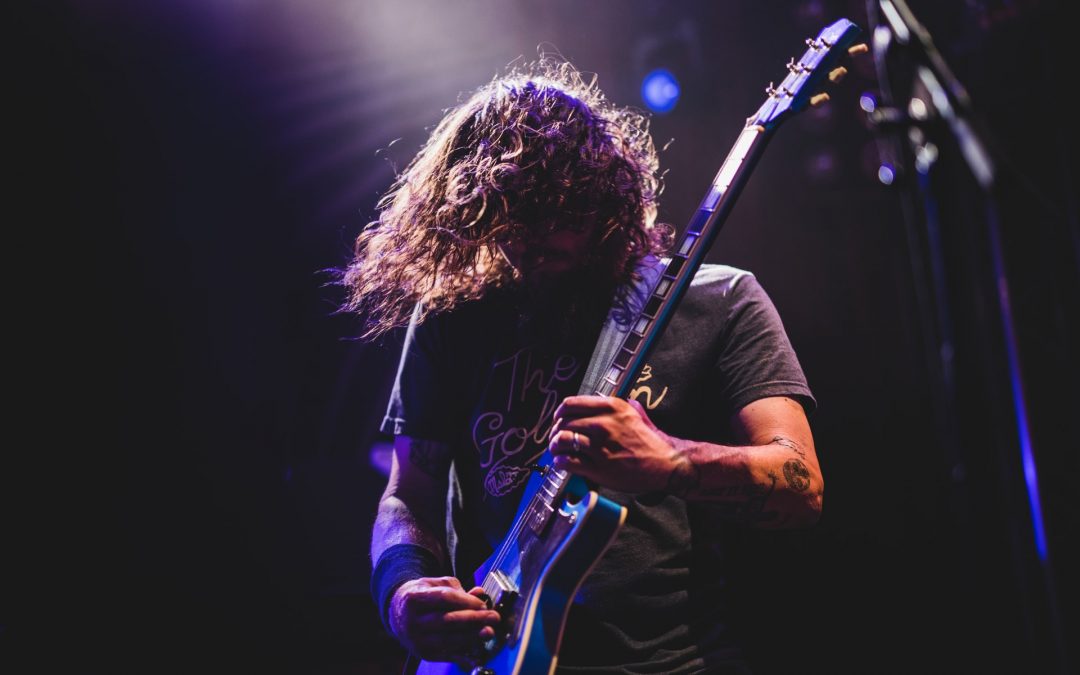 The fact that metal guitarists wear wristbands can be attributed to numerous reasons. For some guitarists, wristbands are a fashion accessory. For others, wristbands have the purpose of sweatbands, keeping the sweat at bay. Wristbands support wrists, which is vitally important for metal guitarists who often strum aggressively. Finally, wristbands reduce friction between the guitar players’ arms and the instrument.

We’ll talk in more detail about wristbands and other guitarists’ accessories. Before we dive into today’s topic, why not take a look at our blog? You can find interesting pieces we wrote about guitarists, including the post on why some guitarists are so arrogant.

Why do metal guitarists wear wristbands?

As previously mentioned, there are a lot of reasons why metal guitarists wear wristbands. In this section of our article, we’ll cover them one by one, so without further ado, let’s begin. If you would like to read more content related to guitar players, check out this piece on why guitar players move their mouths while playing.

Looking like a rock star may be a superficial reason for wearing wristbands, but looks and image are important when it comes to guitar players and musicians in general. Wristbands come in all shapes and forms and in the case of metal guitarists, they often come with spikes or symbols. Wristbands are just one of the ways how rock and metal guitarists express their artistic side.

To keep the sweat at bay

Guitarists tend to sweat a lot during their performances when they are in the spotlight. Sweating from the forehead and the face is particularly uncomfortable because it can run into guitarists’ eyes and sting. In such situations, wristbands come to the rescue and help dry guitarists’ faces so that they can focus solely on the performance.

When metal guitarists play in sleeveless or short sleeves shirts, as they often do, their arms rub against the guitar body, which creates a lot of friction. This friction is uncomfortable for the arms and it irritates the skin. Wristbands function as a buffer between the arm and the guitar. The friction can also wear out the finish on the guitar, so wristbands are important in protecting both the guitarist’s skin and the guitar’s finish.

Those guitar players who don’t use the mics or stands where they can hold the picks, benefit greatly from wristbands. They can use the wristbands to store the guitar picks so that they are always at hand. That way, in case the guitarists drop or lose a pick during a performance, they don’t have to take their eyes off of the playing when they reach to grab a pick. While we are on the subject of guitar picks, you might want to read our article to find out if guitar picks break easily.

To keep the hands dry

Guitar players use wristbands to wipe off their hands when they are sweaty. Sweaty hands can easily cause guitarists’ fingers to slip on the strings. If it happens during the performance it can lead to missed cords or notes. Moreover, it is hard to hold a guitar pick when your hands are sweaty. Find out more on guitar picks in our blog, including how to make a guitar pick out of a coin.

To support the wrist

Playing the guitar for an extended period of time can put a lot of strain on guitar players’ wrists. The more aggressively a guitarist strums the guitar strings, the more pressure is put on his or her wrist. This is particularly the case with metal guitarists. Wristbands alleviate this pressure to a certain extent and protect the wrist area so that one can play for longer periods. In case your thumb hurts when playing guitar, learn what you should do in our blog. 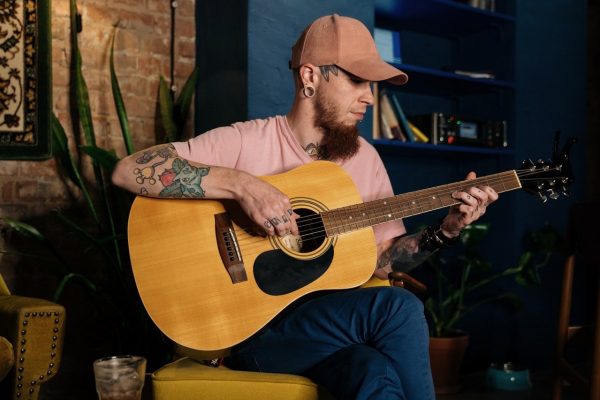 Why do guitarists wear rings?

Similar to wristbands, many guitarists wear rings as a part of their image. Sometimes they wear engagement or wedding rings. There are also times when guitar players decide not to wear any type of ring because of the risk of scratching the guitar finish with it.

Some guitar players also feel that the knocking of the ring interferes with their playing, so they rather take the ring off before they start playing. To be on the safe side and to avoid damage to the guitar, we advise you to remove the rings before playing. However, if you don’t feel that rings pose any kind of problem to you or your guitar then wear them by all means. Many professional guitar players do.

Why do guitarists tape their knuckles?

Cuts and abrasions are common side effects of strumming. Metal guitarists typically play aggressively and as a result, they often injure their knuckles. To prevent this from happening, they tape their knuckles to protect their hands from cuts and blisters. Depending on the style of playing, guitarists tape their hands for these three main reasons:

Why do guitarists get calluses?

Soon after you start playing the guitar regularly, you will notice that your fingertips are getting sore and red. Sometimes they may even start bleeding. This is an entirely normal process that leads to the formation of calluses. Calluses form due to the constant rubbing of fingertips against the guitar strings.

Developing calluses can be a painful process. However, once they form, playing the guitar actually becomes less painful and calluses help you play the guitar better. If you want to find out why playing guitar is so addictive, take a look at our blog. Next are just some ways how calluses help with your guitar playing.

How long does it take to form calluses?

Why does Kirk Hammett play with tape?

Kirk Hamnett, Metallica’s lead guitarist, tapes his hand while playing due to some of the reasons that we mentioned earlier. His habit to tape his picking hand while playing drew a lot of public attention and Kirk explained that over the years, he had developed the little lines on the side of his hand.

As a heavy metal guitarist, his style of playing often caused these lines to break open and start bleeding. He said that when that happened and a guitar string would get into that cut, it felt like the worst paper cut in the world. So the reason why he started taping his hand was to prevent these kinds of injuries.

In this article, we’ve outlined all the reasons why guitarists, with the emphasis on metal guitarists, wear wristbands. We’ve also talked about why they wear rings or decide not to. Learning how to play the guitar is a lot of hard work, but the formation of calluses will help make playing the guitar easier.

Cuts, blisters, and abrasions are commonplace in guitar playing, and a lot of famous metal guitarists tape their hands to protect their knuckles. Despite all of the blisters and calluses, playing the guitar like a pro is worth it all. If you are a beginner guitarist learning how to play, don’t get discouraged because of these obstacles. Just keep on rocking!